Réal Béland and Stéphane K. Lefebvre launch themselves into a brand new crazy adventure in the Land of the Rising Sun! With Nos voisins Dhantsu, they prove once again that they’ll back down at nothing. At times wearing costumes in performances that are planned and rehearsed, and at others improvising or collaborating with other actors and local players, they spread craziness where no one has ever seen it before: in Japan!

Directed by Alain Chicoine, this zany comedy effectively captures the essence of comedian Réal Béland’s vision. A marginal and exploded look at a society that is reserved, orderly and mysterious, through the lens of a moving camera that contrasts with this order and discipline. 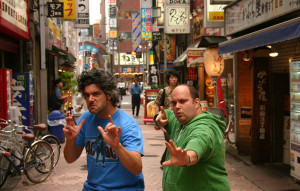